Live Lambda Development allows you to debug and test your Lambda functions locally, while being invoked remotely by resources in AWS. It works by proxying requests from your AWS account to your local machine.

Let's look at how this works in detail.

Working on Lambda functions locally can be painful. You have to either:

To fix this, we created sst start. A local development environment for Lambda. This command does a couple of things:

The DynamoDB table keeps track of the connections. While the S3 bucket is used as temporary storage for passing large requests/responses between the client and the debug stack.

Let's look at an example. 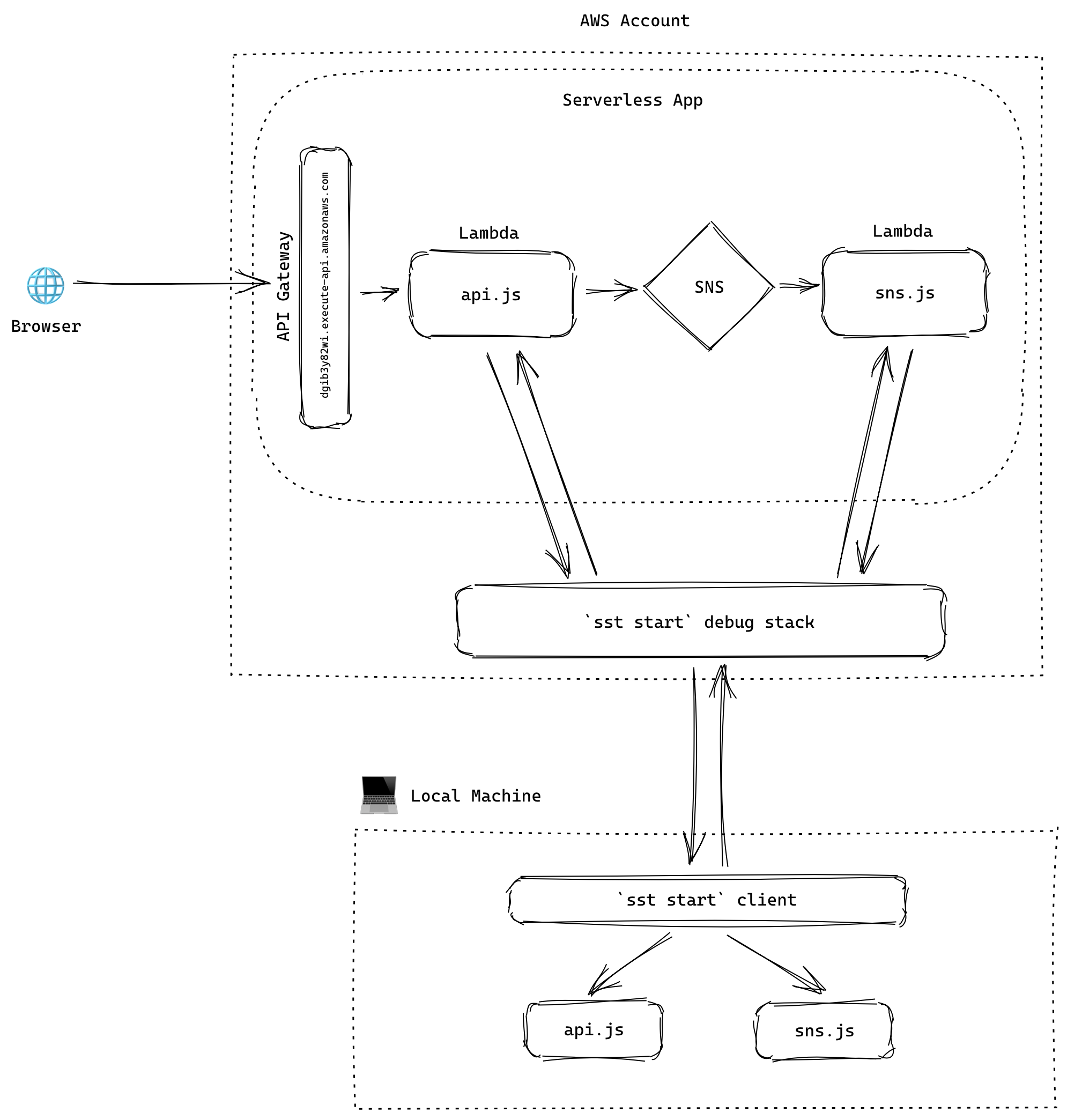 In this sample app we have:

You can try out this sample repo here and read about the sst start command here.

This approach has a couple of advantages.

A couple of things to note.

The above steps apply to the Lambda functions in your app. For the CDK code in your app, SST will automatically watch for changes and rebuild it but it won't deploy them.

Instead, it'll first compare the generated CloudFormation template to the previously built one. If there are new infrastructure changes, it'll prompt you to press ENTER to deploy them. And once you do, it'll deploy your new infrastructure.

Using within a team#

The debug stack is deployed with a stack name that looks like $stageName-$appName-debug-stack. This means that:

This is intentional. SST is designed to give each developer their own isolated development environment.

So the recommended workflow when using within a team is to set the --stage option per developer.

Here the --stage option is simply a string that deploys the given app with its own set of resources. You can read more about the CLI options here.

You can also do something like this in your package.json scripts. Thanks to a user on Twitter for pointing this out.

You can take this a step further and create separate AWS accounts for every developer on the team. This approach is more cumbersome but guarantees complete isolation. AWS allows you to manage these accounts centrally through AWS Organizations.

The other benefit of this approach is that as a developer, you won't need to set the stage in the sst start command.

Connecting to a VPC#

If you have resources like RDS instances deployed inside a VPC, by default your local Lambda function cannot connect to them. You need to:

Note that, the AWS Client VPC service is billed on an hourly basis but it's fairly inexpensive. More details on the pricing here - https://aws.amazon.com/vpn/pricing/

You can add tags to the debug stack by using the debugStack callback method in your lib/index.js.

The debug stack is deployed as a CDK app as well. So the debugStack method is called with its cdk.App and cdk.Stack instances.

Also passed in is a props object of type DebugStackProps.

The DebugStackProps contains the following attributes.

The name of the stage that the app (and debug stack) is being deployed to.